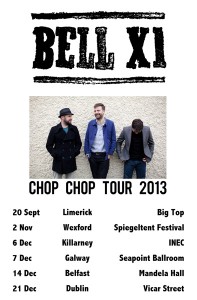 In late 2010, to commemorate the 10 year anniversary of the release of our first record Neither Am I, we set out on an acoustic(ish) tour of North America & Europe.

With guitars, piano and an iPod, it was a very different take on the songs than what has ended up on the records – the three of us taking them back a few steps to how they were born in a lot of cases.

Phil Hayes, our friend and sound engineer, recorded most of the gigs, taking the desk mix and a couple of ambient microphones in in the room.  He also took many photographs of the sky, us guys, buildings and food.

From this bounty we’ve put together Field Recordings, 21 songs and photography from the road, and are very grateful to Phil for it.

We have very fond memories of the tour, traveling as we did in little white vans, with James Vincent McMorrow in North America and John Smith in Europe.

In those small, frequently beautiful rooms we felt a little closer, and it was good to meet so many of yis after. As Bad Santa’s t-shirt said, shit happens when you party naked…

Field Recordings will be available as a double CD or a limited edition (250 only, numbered) 40 page hardback photobook with CDs.  Both packages will only be had from the Bell X1 online Shoppe.  It will also be available from iTunes and most digital retailers on July 20th with PreOrders to begin next Monday, May 14th.

We’ve attached  “In Every Sunflower” recorded live at The Town Hall Theatre in Galway.

We will be touring Ireland in December with special guest Jape.

All shows on sale Friday Oct 14.